Craig M. Essenmacher is partner of Lovell Stewart Halebian Jacobson, LLP and practices out of our Michigan office. Craig focuses on antitrust, and commodities manipulation. He has been involved in the fields of complex litigation and class actions for over ten years.

Craig is a graduate of Michigan State University, Bachelor of Science in 1990. He also graduated from Michigan State University with a Doctor of Philosophy in Chemistry in 1995. During his graduate studies in Chemistry, Craig Essenmacher published three peer reviewed papers in respected scientific journals that include The Proceedings of the National Academy of Sciences, U.S.A. and The Journal of the American Chemical Society.

Craig is an expert in discovery and is involved in numerous discovery issues in pending antitrust and commodity manipulation class actions with the Firm. In addition to writing and advocacy work, Craig liases with experts and consultants in the processing, preparation and analysis of large amounts of transactional and pricing data, preparation of regression analyses, and other aspects of preparing class certification and merits expert reports.

Mr. Essenmacher served as a council member for Michigan State Bar Association section of Antitrust, Franchising and Trade Regulation from 2010-2012. 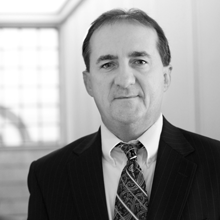